Lit By Lightning: The Transcendence of Zachary Quinto’s Performance in The Glass Menagerie 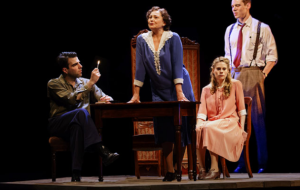 It has been said, time and again, that the secret of success is to write what you know. This is no truer for any writer than for Tennessee Williams.

Williams seems to have the entire library of American archetypes in his coat pocket; with ease he can pull out a completely dimensional woman of the South, a ghost of the Southern past painted vividly into his memory; the broken promise of the American spirit that Williams found in stanzas and rhymes written in the dust of a shoe factory; and a hardworking man beaten by his own triumphs that others had failed to see, the same triumphs that had been published in the form of plays seen by thousands.

Although he was an American who encapsulated America, Williams was even more so a master of the art and understanding of time. He could see into the past and, more importantly, how the past had come to be seen. He could experience the present and embrace all of its beauty and fragility, without losing its taste to the overarching past or mysterious future. Even the future that Williams theorized in his plays, a future he did not experience, came true long after his days of publication—Zachary Quinto can testify.

John Tiffany’s stage production of Williams’ The Glass Menagerie, currently showing at Broadway’s Booth Theater, transcends time with the contributions of Quinto, a postmodern actor who portrays Tennessee Williams’ thematic masterpiece in waves of revelation. The story is a simple one: the profile of a daughter of a once lovely Southern belle, incapable of proceeding into the world before her and unaffected by her mother’s persuasions to try; but this profile is only partially visible, clouded by the narrated memories of her brother that place the story in a realm of understanding far outside the family’s St. Louis apartment. The young man behind this narration, Tom Wingfield—portrayed brilliantly by Quinto—is essentially a characterization of Williams himself. He yearns for a future that is trampled by the past, while his own aspirations are nearly worn away by those of his mother. He must fight against his family’s past if he ever hopes to climb out of his apartment’s fire escape and look boldly into a night of uncertainty, a night lit only by lightning.

As tempted as one may be to say that Quinto’s performance of Tom is “effortless,” an understanding of Quinto’s deep commitment to fulfilling the timelessness of Williams’ work makes his role anything but. There is effort in every aspect of Quinto’s portrayal, especially his diligence in bringing Williams’ past to a postmodern life. There is no one so possessed by the almost impossible balance of classical foundations and postmodern panache who could even match Quinto’s flawless capability of the two. A master of traditional performance art, Quinto understands—and more importantly, appreciates—the depth of Williams’ Tom, and he has such an existential grasp of the self-realization behind today’s cultural mechanics that he can fill and even broaden this depth. Quinto’s role as Tom is a testament to his mastery of timelessness that is seen within Tom’s character. 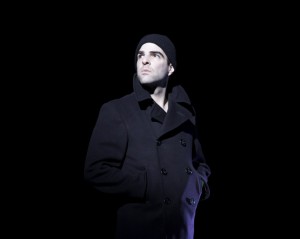 The elusive Tom finds no home in his family’s apartment and no life in the past remembered by his mother or the present fulfilled by Laura. He looks beyond the trivialities found in his family’s existence, and he longs not for a different place but for a different time. He has hope for his future, but his hope is fogged by ambiguity. He is uncertain of what lies ahead; all he can know is that life separated from his family’s past is the only life suited for his spirit. He is uninspired by his mother’s past and frustrated by Laura’s present, but the hope within breaks his caustic persona and brings him to open himself to those in his life. But this openness with his family does not keep him from entering the blurred horizon; he knows that he must cut his ties to them if he desires to pursue independence. In order to finance a future away from St. Louis, Tom chooses to forgo the payment of his family’s electric bill, leaving his past and present—his mother and sister—in the dark.

Zachary Quinto gives a revelatory performance for the ages; his postmodern portrayal of Tom captures the character’s evasive nature and brings his clouded future a sense of clarity. As Tom, Quinto explains his future in a rounded southern accent with a taste of bitterness. He states that while his mother and sister were wishing on the moon, he didn’t go to the moon, but much further, “for time is the longest distance between places.” Through Quinto, Tom journeys to the future, while his feet stay near the place they have always been. Although he may have left St. Louis, his physical self moved no further than his mind. Quinto allows Tom to travelled through time, away from the present and never looking back to the past.

Quinto brings truth to Williams’ prediction of Tom’s future; Williams envisioned that, unlike a past lit by electricity and an innocence lit by candlelight, the reality of Tom’s future is lit by lightning. Lightning does not have the controllable source of electricity, nor the natural tenderness of candles; it is relative and uncertain, the life force of an indeterminate future. Being a man of the postmodern world, Quinto fulfills Williams’ expectations of the American man yet to come. Quinto is no stranger to forgoing societal tradition, and he, the Tom after Menagerie, realizes that in order to reach creative fulfillment, whether Williams’ creative fulfillment as playwright or Tom’s fulfillment as poet, one must honor the American within himself above all else. This future may not be brightly lit, it may not be what is best for the human experience, but it is real and it is true, and it was predicted by Tennessee Williams.

This generation defining performance by Zachary Quinto transforms Williams’ The Glass Menagerie into an enduring piece of American literature that transcends time. Tiffany’s presentation of Menagerie is a must see, and it will make even the faint-hearted daughters and denying mothers of today open their windows and face the truth that nowadays the world is, indeed, lit by lightning.